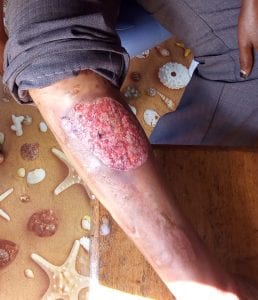 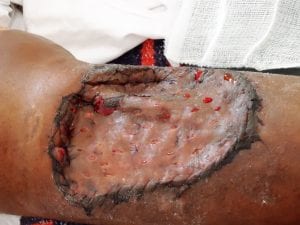 I am deeply appreciative for the out pouring support from CoRSU hospital who have enabled me to be among those chosen for the grant given by Interface to have the chance to be operated on. I am so humbled and touched because am a single mother of 3 children and I operate a small grocery kiosk to feed myself and children.

“Interface A big and special thank you comes from deep down my heart.”

“My leg got burned by the exhaust pipe of a motor bike after a fall off the boda boda on a slippery road.”

My colleague and I were riding back home after a hard day’s  work cleaning and clearing the grounds at the Kalangala Islands Gombolola (sub-county offices) area when we fell off the bike. The road was slippery after it had rained, so  we were unable to move smoothly. . My right leg was badly injured, I was taken to a clinic run by Dr Katende at Bubeke Lwazi in Kalangala district. I was treated but the wound was getting worse and the pain was too much to bear. Dr. Katende advised me to go to Kisubi Hospital. I got so disturbed because I was worried about the money that it would cost me since I had already spent a lot of it yet there was no change in my situation. Upon reaching Kisubi hospital, the doctors referred me to CoRSU Hospital. When I was told that it was close by, so I kind of got a relief because I was worried of the transport fare.

I was taken to CoRSU hospital to get better medical care due to my situation. While there, I saw Dr. Hodges I explained my condition to and what I had been through. He introduced me to a lady called Gloria. She listened to me then later referred me to a social worker to whom we spoke for quite a long time then later came to a conclusion about how best I can be helped in terms of paying my bills. The social worker took me back to Gloria who brought paper work for me to read then sign so that I could be able to be helped by Interface Uganda. I was able to contribute to my bill partly while the rest was offered by Interface Uganda.

I am very grateful and pray for blessings and more donors for the hospital.