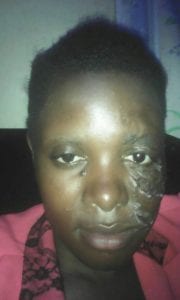 After the first surgery am able to close my eye with ease.

“Interface am very grateful, for your contribution is priceless. You have not only given me joy but hope as well. As an orphan, I would never have had this chance of surgery. Thank you to Corsu because without you I would never have gotten the chance to be helped by Interface.”

My name is Nabiryo, a young girl of 23 years old “ I had a deformity of the lower eyelid on one of my eyes because I fell on a hot flat iron”

As a baby, I was learning how to crawl and I fell next to a hot flat iron that hit my eye. I was rushed to Mulago Hospital for treatment and surgery which wasn’t done properly. So ever since I started having knowledge of who I was, I have had my eye that way. The damage on my left lower eye had a problem of inability to close because of the deformity which came with excessive tearing and pain. My lower eyelid did not close normally so I was sometimes teased by people I met. This made me so resentful to going out of our home to meet other human beings.

Am the 2nd born among 4 children. My father passed on when I was younger and my mother passed on 10 years later. I wasn’t able to complete my studies because I had to sacrifice for my younger siblings to go to school. It wasn’t an easy decision to make but that was our only option we had that time. We were brought up by my elder brother who unfortunately passed away in a car accident  2 months ago. It was such a trying moment for me and my siblings. After my brother’s burial we met a gentleman who told me about CoRSU and how best they could help me with my situation. I did not have the money to go to CoRSU hospital but I was determined to try .When I finally arrived at CoRSU, I was told to pay for my surgery. This made me cry and ask God why this had to happen because I had been told that CoRSU offered free surgery. So I was referred to Dr Galiwango whom I explained my situation. He told me about an organization called Interface that could help me pay. I spoke to a social worker who confirmed that I wasn’t able to pay my surgery. I was asked to at least  make part payment for my surgery which was so hard for me. The bill was given to me and I wasn’t able to pay for it. Nevertheless I convinced the social worker that I would try to come up with only an eighth of the bill. I was in disbelief when I had my surgery, my faith in humanity became a reality.