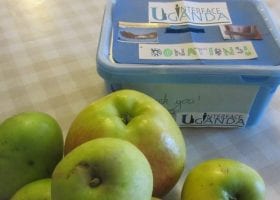 
The Fowler family raised £40 this year for Interface Uganda from selling apples from their garden and home made apple chutney.  Thank you to all their neighbours who put money into the donation box – a great total for apples that otherwise would have gone to waste. 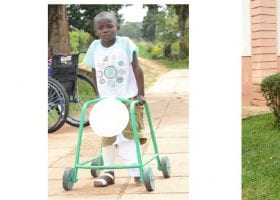 
Thank you to Saudha and the staff involved at CoRSU hospital and to these patients who have allowed us to share their stories with you all.  An example of how Interface is helping children in Uganda.

Here is an excerpt from Gilbert’s story:

Weak and in agonising pain, Gilbert arrived at CoRSU with his father after months of struggle to treating the wound on his ankle.

It all started when Gilbert got a mild cut on his ankle while [...]

New Report from Justus at Kagando


A new report from Justus, who has been working at Kagando hospital with Gloria in the physiotherapy department. Read the full report here.

He is extremely useful to the department in Kagando, and Interface Uganda have agreed to fund him for a further 3 months, which takes him up until March 2019.

The photos are from his graduation, from the wheelchair outreach project in Bwera, and treating a child in the department.

Thank you to Justus for this report, and thanks to Gloria [...]