A GREAT FUNDRAISING YEAR FOR INTERFACE 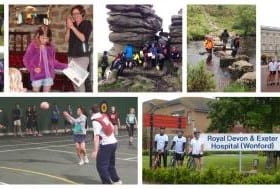 A GREAT FUNDRAISING YEAR FOR INTERFACE


This year, some RD&E physiotherapists have been getting people together to raise money for Interface Uganda. February saw a highly competitive netball match between various physio teams, then in May a team of 9 cyclists rode 180 miles from the RD&E hospital in Exeter to Buckingham Palace. In June, over 50 people took part in ‘The Dartmoor Challenge’ – 2 x 20 mile walks (and 2 x 5 mile walks for the kids) over the weekend. The grand total for [...]