The Silvershine gig went really well, and nearly £400 was raised for Interface.

Thanks to the organisers of the Silvershine Club, who do so much to promote local Birmingham jazz musicians, the free sound engineering from Pete Evans, and the generosity of the audience.

Jo James (Interface trustee) was in the band, playing on 25th July 2013 at The Silvershine Jazz club.   All proceeds went to Interface.

Jo is retiring from her post as consultant anaesthetist at Birmingham Heartlands and Solihull Hospitals, and [...]


The garden concert organised by Sue Moger was a real success.  Great music, lovely atmosphere, delicious cakes, Bar-B-Q, beer, champagne, tea, coffee, raffle!  They had it all!  It could not have been better – a beautiful hot, sunny day, loads of people helping out and enjoying the ambience.  The main fundraising was for Bramble ward at the RD&E hospital, but the proceeds from the very popular tea, coffee and cake stall was for Interface [...] 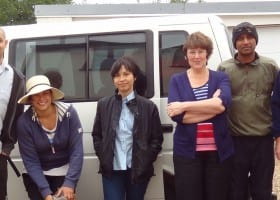 TEAM FROM RD&E HELP AND TEACH IN UGANDA

The majority of time was spent at CoRSU hospital in Kampala, but part of the team also visited Kagando hospital in Western Uganda.